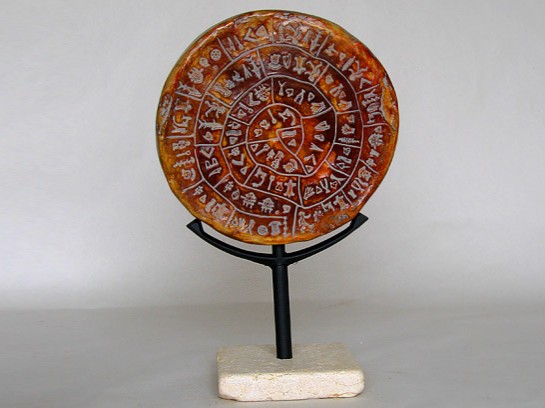 The Phaistos Disc is a curious archaeological find, likely dating to the middle or late Minoan Bronze Age.

Its purpose and meaning, and even its original geographical place of manufacture, remain disputed, making it one of the most famous mysteries of archaeology.

It is the first known document manufactured from reusable characters. This unique object is now on display at the archaeological museum of Herakleion in Crete, Greece.

The Phaistos Disc was discovered in the basement of room 8 in building 101 of the Minoan palace-site of Phaistos, near Hagia Triada, on the south coast of Crete. Italian archaeologist Luigi Pernier recovered this remarkably intact "dish", about 15 cm in diameter and uniformly just over 1 cm thick, on July 3, 1908 during his excavation of the first Minoan palace.

It was found in the main cell of an underground "temple depository". These basement cells, only accessible from above, were neatly covered with a layer of fine plaster. Their context was poor in precious artifacts but rich in black earth and ashes, mixed with burnt bovine bones. In the northern part of the main cell, in the same black layer, a few inches south-east of the disc and about twenty inches above the floor, linear A tablet PH-1 was also found. The site apparently collapsed as a result of an earthquake, possibly linked with the explosive eruption of the Santorini volcano that affected large parts of the Mediterranean region ca. 1628 BCE.

Yves Duhoux (1977) dates the disc to between 1850 BCE and 1600 BCE on the basis of Luigi Pernier's report, which says that the Disc was in a Middle Minoan undisturbed context. Jeppesen (1963) dates it to after 1400 on the basis of a wrong translation of Pernier's report. Doubting the viability of Pernier's report, Louis Godart (1990) resigns himself to admitting that archaeologically, the disc may be dated to anywhere in Middle or Late Minoan times. J. Best (in Achterberg et al. 2004) suggests a date in the first half of the 14th century based on his dating of tablet PH 1.

No object directly comparable to the Phaistos Disc has been found. There is, however, a small number of comparable symbols known from other Cretan inscriptions, known summarily as Cretan hieroglyphs. First, there is the votive double axe found by Spyridon Marinatos in the Arkalohori Cave, which has "similar, but not identical" glyphs. (Kober 1948:88) The altar stone found at Malia is more distantly related. Finally, there is a seal fragment (HM 992), dated to the 18th century, bearing the "double comb" sign (21). No inscription made with the same set of stamps has been found. Other artifacts bearing spiral-shaped inscriptions are known both from Crete and the Aegaean in general, and even from Etruria. A spiralling Linear A inscription is found on the golden ring of Mavro Spelio near Knossos (KN Zf 13). The Iron Age Discus of Magliano bears a spiralling inscription in Etruscan.

A very peculiar find was made in 1992 in a basement in Vladikavkaz, North Ossetia: A fragment of an apparent copy of, or draft for the Phaistos disc, with the symbols incised with a stylus rather than imprinted. It is uncertain whether this artifact is genuinely ancient, a good faith modern copy of the Phaistos disc, or a bad faith attempt at forgery. The house in the basement of which the fragment was found was built in 1880. Allegedly, the object was recognized as a fake and returned to its private owner.