The Snake Goddess A' 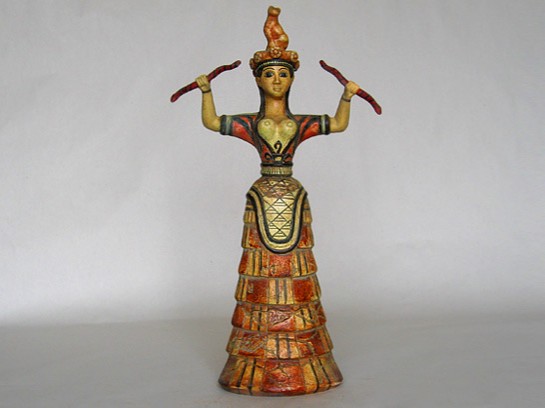 Snake Goddess describes a number of figurines of a woman holding a snake in each hand found during excavation of Minoan archaeological sites in Crete dating from approximately 1600 BCE.

By implication the term also describes the deity depicted although little more is known about her identity apart from that gained from the figurines. The first discovered was found by the British archaeologist Arthur Evans in 1903. The figurine found by Arthur Evans uses the faience technique , for glazing earthenware and other ceramic vessels by using a quartz paste. After firing this produces bright colors and a lustrous sheen.

The snake's close connection with the Minoan house is believed to indicate that the goddess to be a Household Goddess. The snake also has symbolic associations as an underworld deity.

While the idol's true function is somewhat unclear, her exposed and amplified breasts suggest that she is some sort of fertility figure. Additionally, the fact that she is holding snakes, phallic symbols, might represent her dominion over man.

The image has been adopted by some contemporary feminists and Goddess worshipers as representing the psychic and spiritual power of women.

Other goddesses known to be associated with snakes are:

The ancient Egyptian goddess Renenutet often appeared in the form of a hooded cobra.

The goddess Wadjet, associated with the Lower Egyptian sanctuary of Buto.